For the purpose of air border security 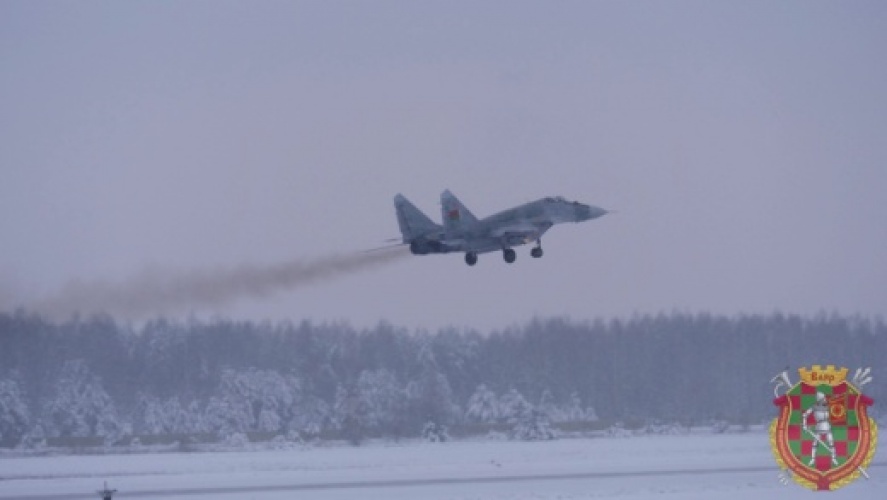 Joint exercises of different branches of troops, special troops of Air Force and Air Defense took place under leadership of Major General Igor Golub, Commander of the Air Force and Air Defense. Over two thousand military personnel and more than ten units of aviation equipment were involved in the exercises. New techniques and methods of using military units and subunits of the Armed Forces were tested taking into account the experience of dealing with modern local conflicts.

The topic of exercises - "Joint operations of aviation, air defense missile, radio-technical as well as electronic warfare military units during fulfilment of mission tasks" – arises from the requirements for combat operations in modern situation.

- The exercises are practice-oriented. Before, a number of military units and subunits were brought to the highest degree of combat readiness recently, marched to the specified areas and took up positions assigned to provide air defense of designated objects from air attacks of a simulated enemy.

Firstly, the main component of objects air defense was operation against low-altitude and low-speed air targets such as "unmanned aerial vehicle" and "air balloon". The second component is aircraft operation in ECM and active jamming environment. Finally, the third component was implementation of technique "see-fire-change position."

The combat readiness of the Air Defense units was tested by real flights of training targets. For this purpose, a complex air situation was created. For its creation, combat aircraft were involved taking off from three stationary and two tactical airfields. More than ten "aircraft" were in the air simultaneously.

A truly "combat" situation was created for subunits combat crews. It is very difficult to clearly see the training target "air balloon" drifting over the range, with low cloud cover and snow precipitation, from a fighter at a speed of over 600 km/h. It is necessary both to detect the target and engage it with onboard weapons. Even more challenging target is a flying UAV, continuously maneuvering in the air.

Combat operation of new and upgraded weapons, military and special equipment was practiced on the ground and in the air during counteractions against high-precision weapons and strike UAVs in active jamming environment.

“We used upgraded Prostor automation system for the first time which was adopted by the Army at the end of last year,” said Major General Igor Golub. - It combined combat crews of command posts of military units and subunits into a single high-performance information network, significantly increased the ability to control subordinate troops, detect and track airborne targets.

In addition to Prostor, a combat crew of the newest track radar system “Sopka” took part in performing combat training tasks for the first time. It was adopted by radio engineering troops last year and has become a reliable source of radar information and fighter aircraft guiding and navigation system. The latest multifunctional fighter-interceptors Su-30SM were used as well.

Not only the new equipment has been tested. The soldiers who were called up for military service last autumn took part in fulfilling training missions of the exercises of the Armed Forces. They have undergone basic military training, finished combined arms training recently and joined combat crews of military units and subunits. This is the first combat training "exam" for them.

- Moral and psychological readiness of the personnel to fulfill assigned tasks is high, - said Major General Igor Golub. - The officers and civilians stay united with the President of the Republic of Belarus - the Commander-in-Chief of the Armed Forces and are ready to fulfill all the tasks set to ensure independence and territorial integrity of the country as well as inviolability of its air borders.

.. On that day, reconnaissance detected an aircraft taken off from the territory of a neighboring country. Moments later, it was identified as an American RC-12 reconnaissance aircraft. On board - RADINT and ELINT equipment as well as high-precision radio station positioning equipment. All its maneuvers were perfectly visible on the monitors of combat crews. Despite the fact that the reconnaissance aircraft was 70 km away from the Belarusian border, a duty fighter took off by the Commander’s order.

- The range of weapons, military and special equipment of the Air Force and Air Defense is being renewed fast, - assured Major General Igor Golub. - In a new academic year, modern radar stations "Protivnik-GE", "Vostok" will be adopted by radio-technical troops. Aviation troops are looking forward to supply of multifunctional strike Mi-35 helicopters and the second batch of Su-30SM fighters. In the future, S-400 and Pantsir-S air defense systems, aircraft on-board systems being part of EW equipment will strengthen the Armed Forces.