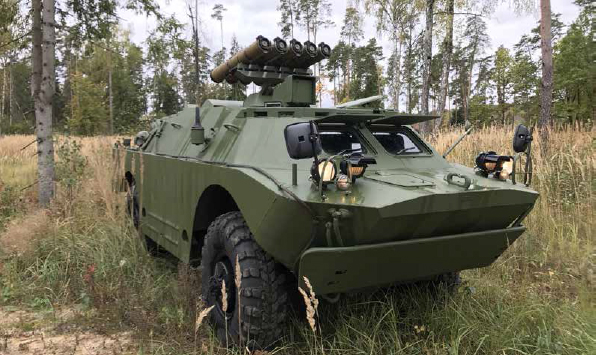 9P148 “Konkurs” anti-tank missile system is designed to hit both targets moving at speed up to 60 km/h and stationary targets such as pillboxes and earth-and timber bunkers in conditions of optical visibility with 9M111-2 or 9M113 anti-tank guided missiles. It is possible to launch missiles from prepared and non-prepared firing positions. Besides, missiles can be launched afloat both to ground and floating targets. When firing on land, missiles can be launched only from stationary position.

Surveillance devices
In order to monitor terrain, search and select a target, the senior operator’s workstation is equipped with two TNPO-170 observation devices and 9Sh119M1 optical sight. The 9Sh119M1 device has 10x magnification and 300 mm periscopicity. The viewing angle of the view finder is 5.

Chassis
All units and equipment of anti-tank missile system 9P148 are mounted on GAZ-41-08 chassis which is a modification of armored reconnaissance and patrol vehicle BRDM-2.