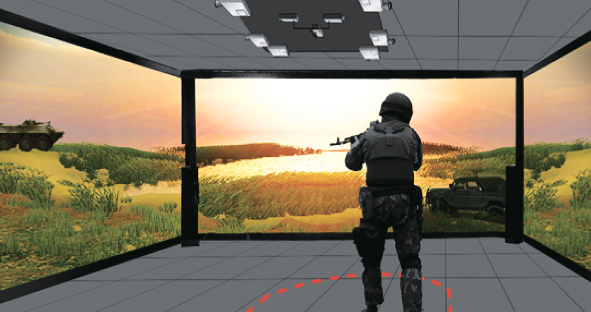 The system ensures
• Obtaining skills of reconnaissance of enemy/terrain by observation and by use of the firearms on the detected targets upon the unit commander’s order or by own initiative;
• Development of skills in using the small arms and antitank weapons;
• Development of automatic performance, when using the weapons;
• Monitoring of ammunition expenditure with subsequent report to the commander;
• Formation of the correct habits for choosing/fitting-out the firing site (firing place), use of protective camouflaging features of the terrain under the conditions of the virtual firepower effect on the trainees;
• The open architecture allows adaptation of the system for simulation of a required combat environment.

The number of shooting ranges assigned individually to each trainee as well as the target environment and landscape are determined by the Customer.

Video based scenario mode
Training of the special forces and development of rapid fire skills in-doors and in inhabited localities on the basis of prepared video scenarios.

Interaction of the system components
The simulator set uses the makes of the firearms being in operational service of the Special Forces and Armed Forces.

The simulator configuration and composition, the number and type of the weapon simulators can be changes according to the Customer’s requirements.