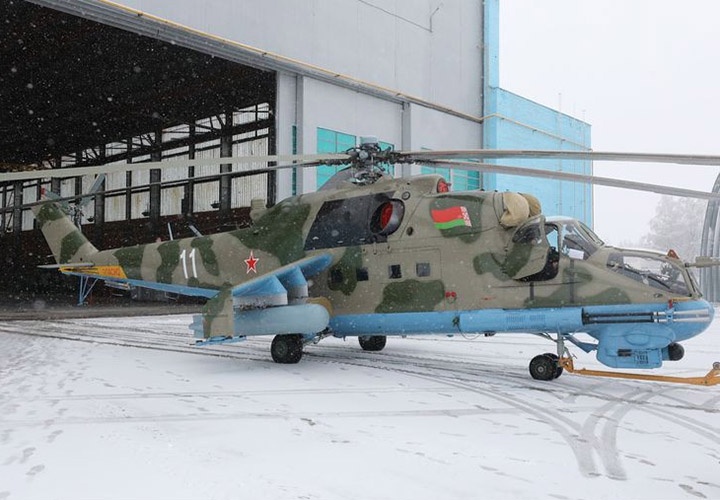 Overhaul of the third helicopter of the Armed Forces of Belarus was completed by the specialists of JSC “Orsha Aircraft Repair Plant”. Employees of the enterprise have completely restored the combat vehicle and have also installed the latest equipment on it. The plant’s cooperation with Belarusian military representatives resumed after the enterprise returned to the state property in July 2018. In accordance with the President’s decree, shares of the plant were repurchased from the former shareholders. Prior to this, the plant belonged to two private companies – Belarusian and Ukrainian ones. The enterprise was in poor shape due to non-fulfillment of obligations assigned to investors under the contract.

Three months of work, two weeks of tests and one day to deliver the helicopter to the Client. Mi-24 overhaul was carried out according to this schedule. The helicopter was delivered to JSC “Orsha Aircraft Repair Plant” in poor shape but thanks to the professionalism of Mr. Alexander Berezovsky and his colleagues, the old vehicle found a new life. Even the so-called black boxes were modernized.

This helicopter has become the third one, which the Armed Forces of Belarus tuned out at JSC “Orsha Aircraft Repair Plant”. By now, the Customer has inspected the vehicle and has been satisfied by the work performed. After acceptance, Mi-24 helicopter was taken out of the repair box and tomorrow it will be sent to its initial military unit.

JSC “Orsha Aircraft Repair Plant” and the Armed Forces of Belarus have planned even more fruitful cooperation for the future. According to the agreement, Belarusian helicopters will undergo major repairs here. Such a profitable tandem was formed due to the return of the aircraft repair plant to the state structure. Before that, the plant was patronized by two private companies from Ukraine and Belarus for several years.

According to the Director, plant’s stock of orders has been already formed till the end of this year. The plans include access to new markets.

Just a couple of years ago, a sad picture emerged at the enterprise: destroyed workshops, empty repair boxes, old equipment. At that time, two private companies managed the aircraft repair plant - the Ukrainian company “Motor Sich” and the Belarusian company “Investment and Innovation Systems”. But thanks to timely state intervention in the affairs of the enterprise, serious consequences were avoided. In accordance with the President’s decree, the shares of the plant were fully redeemed from the former shareholders and transferred to the ownership of the State-owned foreign trade unitary enterprise “Belspetsvneshnekhnika”.

Today, a new three-floored workshop for the repair of aircraft equipment is being built on the territory of the plant. It will be a modern production site, which will allow aircraft repair plant to reach a "new level of flight", which means it will become even more competitive.