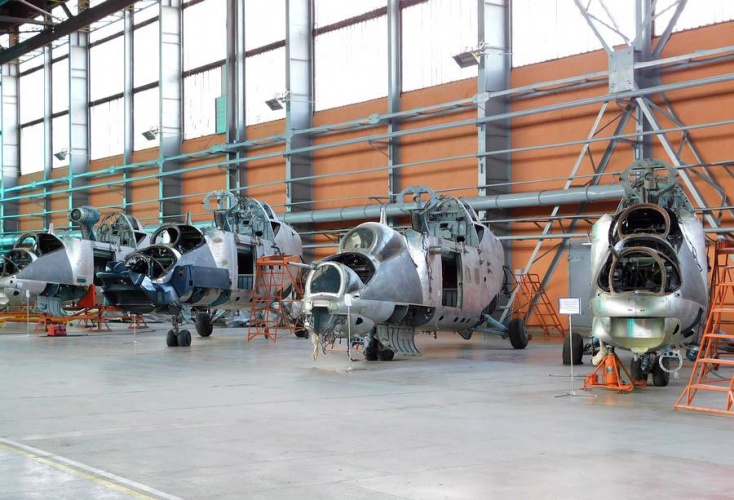 JSC “Orsha Aircraft Repair Plant” is one of city-forming enterprises of the region. More than 650 people are working here now and already looking with confidence to the future.

Why already? Because last year when the head of the state Aleksander Lukashenko visited the plant, the situation there left much to be desired. With previous investors there were no orders, debts were growing, people were resigning and President instructed to bring order to the plant.

Today JSC “Orsha Aircraft Repair Plant” is a state-owned enterprise under the State Authority for Military Industry for the development of which a business plan has been developed. According to the General Director of JSC “Orsha Aircraft Repair Plant” Mr. Pavel Sluchak, the situation at the enterprise has stabilized. The growth of production volume during last 9 months amounted to 257.1%, export - 266%, the income growth rate from sales of goods (services) - 313.7%. The salary increased more than 2 times and amounted to an average of 986.5 BYN and in September - almost 1200 BYN. For the first time in recent years the plant has returned to profitability. In January - September 2019 more than a million rubles were received.

This year seven helicopters have already been repaired here, six another helicopters will fly into the sky before the beginning of 2020. The enterprise successfully cooperates with Central Asia, South America, the Caucasus region, Africa.

“We are expanding our geography, signing new contracts, – Mr. Pavel Sluchak said. – Our stock of orders have already been formed by more than 50% next year”.

One of the indicators of positive dynamics is modernization and reconstruction of the enterprise.

“19 items of various technological equipment were purchased,” – the General Director noted. – Until the end of the year six more items will be purchased and installed in a new integrated workshop which will concentrate the main production stage. Project design works on it are at its final stage. In 2019, the central plant laboratory was equipped with the latest calibration equipment. Now design-engineering department has modern software for computer-assisted design”.

Next year it’s planned to put in commission the overhauled building of flight test station and in 2021 – assembly repair workshop, two refurbished hangars and modernized warehouse of fuels and lubricants.

At the same time, the process equipment for aircraft repair is gradually replaced with more modern and high-performance one. The modernization results in resource saving, increased labor productivity, extended range of activities and reduced dependence on foreign suppliers.

The territory of the enterprise is being improved. In the coming days, about one thousand trees and shrubs will be planted here, parking lot and new central entrance are being built now.

Indeed, JSC “Orsha Aircraft Repair Plant” is steadily gaining altitude. It is evidenced by both economic indicators and situation in the social sphere as well as mood of people. The important thing is that the outflow of personnel has stopped, young people prefer to stay at the plant.

“It’s facilitated by social and working conditions, – says Mr. Vasily Chirkunov, Deputy General Director for ideological work and social issues. – With the support of SFTUE “BELSPETSVNESHTEHNIKA”, shareholder of our enterprise, we have completed the reconstruction of the second dormitory as well as more than 20 apartments for small families have been settled in. It is also planned to build a residential apartment building for our employees.

The plant thinks about leisure time of its workers. Tennis tables have been installed in the halls of the administrative building, dormitories and structural units.  Soon, gym will open for everyone.

The management of the enterprise also does not forget about sponsorship of the town of Bolbasovo. In addition to active participation in the improvement of the town, they helped to reconstruct the House of Culture and repaired the stands at the stadium. Annually they provide sponsorship for repair of local school and kindergarten No. 5. It’s no wonder because Bolbasovo is not only the hometown for the enterprise itself, but also for the majority of plant workers.